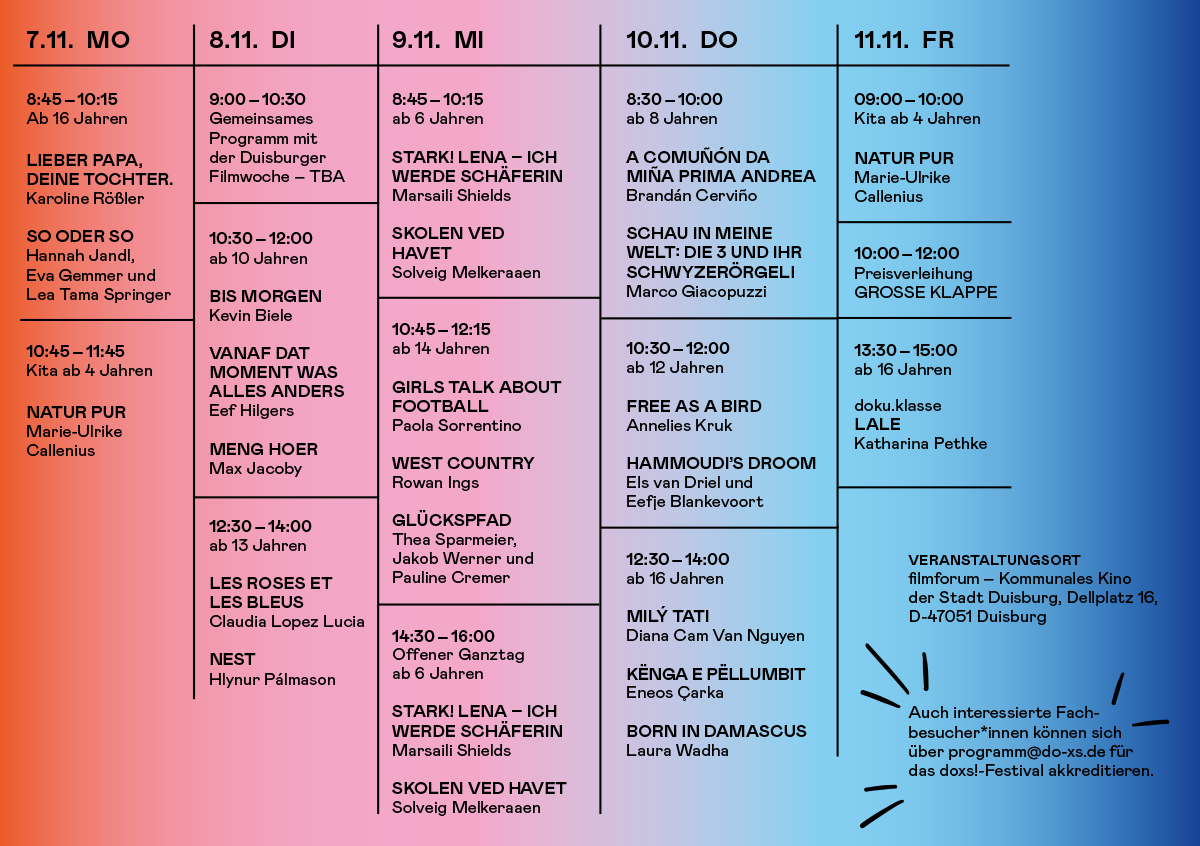 THE BEST IS YET TO COME.

The upcoming edition presents creative European documentaries for children and adolescents. Apart from the films in competition (GROSSE KLAPPE), the festival includes programme for preschoolers, special screenings and experimental documentaries.

The festival is dedicated to any kind of young school audiences. The pupils do not only attend the screenings but also discuss the films they have just seen with directors and film experts. The international films are subtitled and dubbed if necessary.

The programme in the cinema will be accompanied by an online offer for schools. All screenings, whether on-screen or digital, can be used free of charge, but as always, registration is required in advance.

doxs! is the oldest German film festival exclusively presenting documentaries for children and adolescents. The international film programme is part of the well known documentary festival „Duisburger Filmwoche“. Each screening is accompanied by a moderated Q&A. The entry to all screenings is free for accredited festival guests and pupils.

The award acknowledges European films promoting an aesthetic approach to documentary culture and the political consciousness of children and adolescents. On the occasion of the festival’s 10th anniversary doxs! celebrated the award’s premiere in 2011.  The „GROSSE KLAPPE“ is endowed with 5.000 Euro by the Federal Agency for Civic Education. A youth jury selects the winner of the competition.

The in 2016 newly established „ECFA Documentary Award“ promotes aesthetically and formally extraordinary documentaries that are aimed at the age group of 6 to 12 year olds. Given by the European Children’s Film Association, which is Europe’s biggest network for children and youth films, the prize will be handed over during the festival’s award ceremony in Duisburg. An expert jury consisting of international ECFA members decides on the competition’s winner.

Special mention for „Gleichgewicht / Keeping Balance“ (AT 2015) by Bernhard Wenger